The bridges of Paris 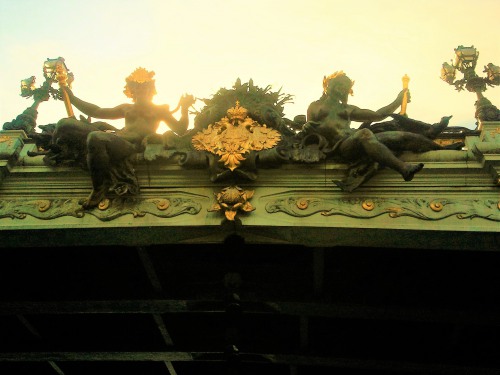 The birth of Paris took place on the Ile de la Cité, a prime location and inescapable crossroads for the different routes of ancient Gaul. The left bank is the home of three routes Lyon-Italy/Dreux-Bretagne and Chartres-Loire. The right bank serves the North East of the country. These ancient routes are still visible today on Paris’ cartography. Very early on, two wooden bridges were constructed to link the Ile de la Cité to both banks. Over the next eight centuries these were moved, refurnished and reconstructed, Le Grand Pont (right bank) and the Petit Pont (left bank) are regularly destroyed by weather and fires but nevertheless remained vital for the growing Roman settlement, principally located on the left bank.

During the 12th century, the Grand and Petit Ponts experienced a radical makeover as they were ligned on both sides by wooden houses. The ground floors of these were centred on trade and would serve as storefronts. The first stone bridge in Paris was built near to Notre Dame by the Romans, who had mastered the technique of building arched bridges in stone. These were followed by bridges without houses. In 1607, Henri IV inaugurated the magnificent Pont Neuf, which had some of the first pavements and allowed the locals to peaceful contemplate the Seine. The first metal bridges made their appearance in 1803 with the construction of the Pont des Arts and later the Pont d’Austerlitz. It would not be until 1900 for steel bridges, such are Alexandre III, to make an appearance. Meandering your way along the Seine with on a boat and admiring each of the 37 bridges in Paris is one of the most enjoyed tourist attractions in Paris.

The original structure dates back to at least 52 BC. Since then numerous wooden bridges have followed, always being destroyed and then rebuilt. It is here that the banks of the Seine are closest to each other, and was the point of convergence of the romain road netwok and an extension of the ancient cardo maximus. In 1130, the first fortified mansion was built by Louis VI. This would then be incorporated into the enceinte de Philippe Auguste which was built between 1190 and 1215 to protect Paris. It is the shortest bridge in Paris, being only 40m long and 20 wide.

Situated at a strategic location on the North-South axis, it used to be known as the Pont du Roy in 861. Ten years later it was fortified with a tower, real protection against the Normans. It would once again change name, and became the Grand Pont and was the only structure linking the Ile de la Cité to the right bank for a long time. In 1141, a flood destroyed the structure; its replacement was built slightly farther to the west and was covered with houses that held currency exchanges that were under the protection of Louis VI. As a result, he would become known as Louis the Yellow. Foreigners coming to Paris could exchange their currencies here, the money was then transferred to l’hôtel de Monnaies. To this day it has kept its name; it was rebuilt in 1647 in stone with seven arches and one hundred and six three story houses. Prior to the destruction of the grand Chatelet fortress in 1808, the rioters took the prisoners out of the cells, executed them and displayed their bodies along the pavement of the Pont au Change. The masterpiece was rebuilt between 1858 and 1860 in stone with three 32m elliptical arches.

Completed in 1635, Christophe Marie began construction of the bridge in 1613. Located right next to the Pont Neuf it leads to the rue des Deux-Ponts on the Ile Saint Louis, It has five arches and used to have fifty identical three storey artisan’s houses spread evenly across both sides of the bridge. The original structure was destroyed during a particularly destructive flood in 1658. It was rebuilt, and over time the three storey houses disappeared, with the last remaining houses being removed in 1788. In 1851, during the public works of the second empire, the bridge underwent further refurbishment which gives us the structure we see today.

Initially built in 1656, with six arches it resembled the Pont Marie; however, it was thirty meters longer and had no houses. During the flood of 1910 the original structure was damaged. Up until then it had been a real bastion against the waters of the Seine. Despite this, it had become an obstacle to modern shipping. In 1928, the original structure was replaced with a three arch bridge, the arches on the extremities measuring 11m and 12.5m wide, with the central arch being 74m wide, this is that bridge that can be seen today.

A statue of the city’s patron saint, Saint Geneviève, stands atop a 15m pillar on the bridge. The statue is the personification of Paris, with the small girl (the nave, a symbol of the city) being shielded by the patron saint.

The original purpose of the bridge was to facilitate communication between the Royal Palace (the Louvre) and the powerful abbey of St Germain des Près. In 1578, Henri III laid the corner stone of the bridge.  It was designed with pavements for the pedestrians and a central road for the horses and carriages. The feeling of spaciousness on the bridge and the views of the river delighted the Parisians and would produce a constant buzz around the bridge. For a long time it was the most lively part of the capital city.

It is a simple walkway that links the Institut de France to the square courtyard of the Louvre. It was the latter that would give this bridge its name, as at the time of the first Empire, the Louvre was known as the Palais des Arts. In 1801 Napoleon Bonaparte ordered the construction of this first cast iron bridge. Originally, a small toll booth in a miniature park granted access to this bridge. One could rest here and enjoy the incredible view of the city and the river. As the result of multiple barges colliding into the bridge reconstruction was undertaken so as to widen the arches for commercial shipping. The structure was reinforced by replacing the cast iron with iron and ironwood. Visually it is still very similar to the original structure, and the arches follow the same set up as the Pont-Neuf.

The first stone was laid by the president Félix Faure and Nicolas II of Russia, the son of Alexander III, in 1896 as a celebration of the Franco-Russian friendship. Designed for the universal exposition in 1900, which would see the arrival of 51 million visitors, it is one of the most beautiful architectural masterpieces of Paris. A testament of technical prowess (109m of steel in a single cast), it has magnificently elegant lines, a very subtle arching and is beautifully adorned with the works of 17 different artists.

One of the most sought after spots in Paris is located just underneath the bridge: the club and terraced restaurant FAUST.

This pedestrian walkway is 6.5M wide and was built for the Universal Exposition in 1878. It links the heights of Passy to the plane of Grenelle on the left bank. In 1904 the metallic viaduct was built, which today is used by the underground line 6. The iconic tear drop lanterns that line the walkway were redone in 1993. One of the masterpieces of metallic architecture it has made an appearance in several films and movie clips (inception, Benjamin Gates and the Book of Secrets…)

The bridge was originally a suspension bridge with a toll booth built in 1832 under Louis-Philippe. It was replaced during the Haussmann public works by the stone master seen today. The iconic bridge with five semi elliptical main arches superimposed with a pedestrian walkway of fourty one giant arches on top of the road, makes it one of the most beautiful bridges in France.