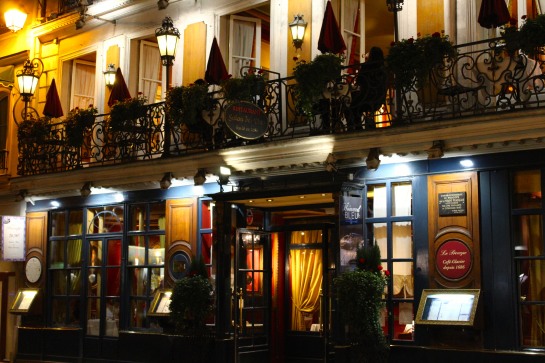 St-Germain-des-Près walk. Known as the Latin quarter, it has been Paris’ heart since its inception. The quarter was, the epicenter for the protagonists of the French Revolution. It is a place of literary and political thinking, a place the café terraces have always been buzzing with the sounds of passionate conversations. It was here that information was shared and plans were drawn up…

Located at the Place de l’Odéon, this theater was built in the Greco-Roman style, with its colonnades and using the same symmetry as seen in Greek temples. It was commissioned under the reign of Louis XVI.

It is located in Place Henri Mondor, the revolutionnary district. It was always enjoyable to have a drink at Café Procope, 13 Rue de l’Ancienne Comédie, where people would revel in latest political gossip and critique the latest theatrical pieces of the Comédie Française. Diderot, Rousseau, Voltaire and Danton were frequent customers, it is truly a museum of the French Revolution !

Formally la Porte de Buci, this was once Paris’ medieval gateway, houses that were built during the 18th can be found at numbers 12 and 16.

A shaded courtyard where one can enjoy a relaxing stroll. In the 18th century, it used to house stables. The Delacroix museum can be found here. It has been linked to the Louvre since 2004 and should not to be missed !

The oldest church in Paris. This religious building suffered a lot of damage during the French Revolution. It was close to Rue Bonaparte, name of a young Corsican who liked to frequent the area…

Keep walking to the Panthéon, an architectural masterpiece, it was designed by the architect Soufflot and is located on St-Geneviève moutain. It honours the great men and women of French history. Titans such as like Voltaire, Rousseau, Bichat, Corneille, Napoléon Bonaparte, Marie Curie are all honoured here…