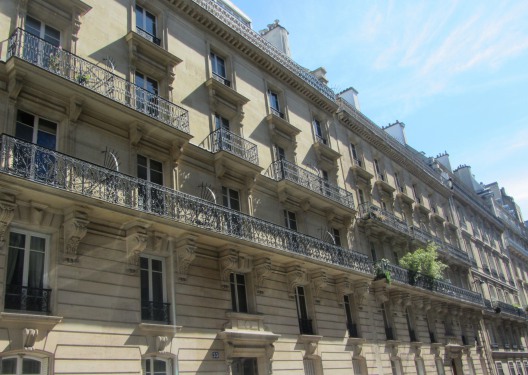 The walk Haussmann showcases specific Parisian architectural works as well as the public works of Baron Haussmann. He redesigned the layout of the city to both enlarge it and make it cleaner. 19th century, Paris was full of dark, narrow and putrid streets, reorganizing the neighborhoods, improving the road network and creating parks and squares to improve the quality of the air were essential. This huge undertaking took almost 20 years to complete.

The stock exchange opened its doors in 1826, it is another Parisian reference to antiquity during the 19th century neighborhood was abuzz with the energy of the stock exchange.

A place revered by the Parisians for its prized walks which offered respite from the putrid streets and their fetid streams.

The oldest Paris walkway, which now extends into Rue Jouffroy.

Inspired by ancient Greco-Roman temples, it was here that vaudevilles were performed. Notable authours include Scribe, Feydeau, Labiche who would go on to earn it royal patronage.

Famous for its wax statues that tell the lives of celebrities of the time.

It is found on Rue Favart and is a mix of different architectural styles, classical, renaissance and antique. It is a true profusion of decorations and different materials.

A perfect example can be found at 6 Boulevard des Capucines, take the opportunity to go to the Grand Café Capucines or the Café de la Paix, both are very chic addresses in Paris.

Designed by Charles Garnier, a celebrated architect who at the time was unknown, it is the the old Paris Opera House. One can finds his bust when passing the opera on the left hand side taking Rue Auber. Lets not forget the double ramp leading to the emperor’s pavilion, it was reserved for Napoleon III and was designed to protect him from assassination attempts.

Department stores whose origins trace back to the end of the 19th century. Make your way to the 5th floor to one  of the balconies to admire its dome and its stained-glass windows.