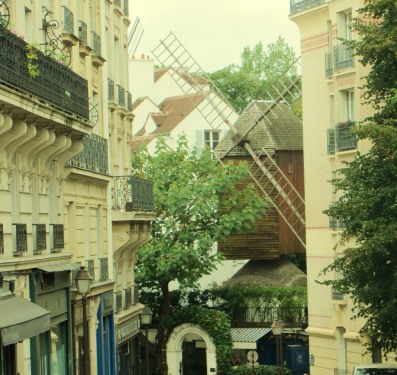 Go for a walk in Montmartre. There is a fantastic view of Paris from the Sacré Coeur Basilica. They are feels and looks like a country village and feels out of place for the bustling heart of the capital. Many artists would come here to take refuge from the buzzing metropolis and enjoy its peace and tranquility.

Found at number 12 Rue Abreuvoir, it is a perfect example of the village houses which once lined the streets of 19th century Paris. It has featured in several paintings by Maurice Urtillo. His paintings, which were once priced as nothing more than elegant sketches are today worth a fortune.

Number 4 of Rue Saules, it was the headquarters of the artists and poets of Montmartre where some of them would recited their verses and songs. Right next door you can find the Montmartre vineyards. Every autumn they host a auction for wines produced the previous year. Official website

Built in Neo-Byzantine style, the first stone was laid in 1875 and the building was officially inaugurated in 1919. The basilica is a remarkable place of historic pilgrimage. Its stones have remained white since its inception and it was built with limestone from the quarry at Chateau Landon. Limestone secretes, a white material called the calcin when it enters into contact with wather, meaning the Basilica is self cleaning and always keeps its colour. It is one of the most visited monuments in Paris.

Up to 300 artists display their works here. During the summer, the café’s terraces are full of people enjoying the sunshine by sun lovers. It’s first come, first served ! So it is best to go in the morning.

Poublot is one of Montmatre’s famous painters, his favorite theme were the kids from the neighbourhood. They could always be found hanging about in the village streets. They would be dressed in shorts with boots that were almost always too big for them.

An historic restaurant located in Rue Lepic also known as Blute-Fin. It was frequented by Renoir, Van Gogh, Utrillo, Picasso… It is an old wooden windmill that has been beautifully restored. The hills of Montmartre were once home to dozens of windmills, some of the more known include the moulin de la Béquille, moulin de la Turlure, moulin de la Lancette and moulin de la Poivrière. Official website

13 Place Emile Goudeau, the main facade is all that remains of the former artists’ workshops and warehouses.